Inspired by the experiences of Bobbie Dameron 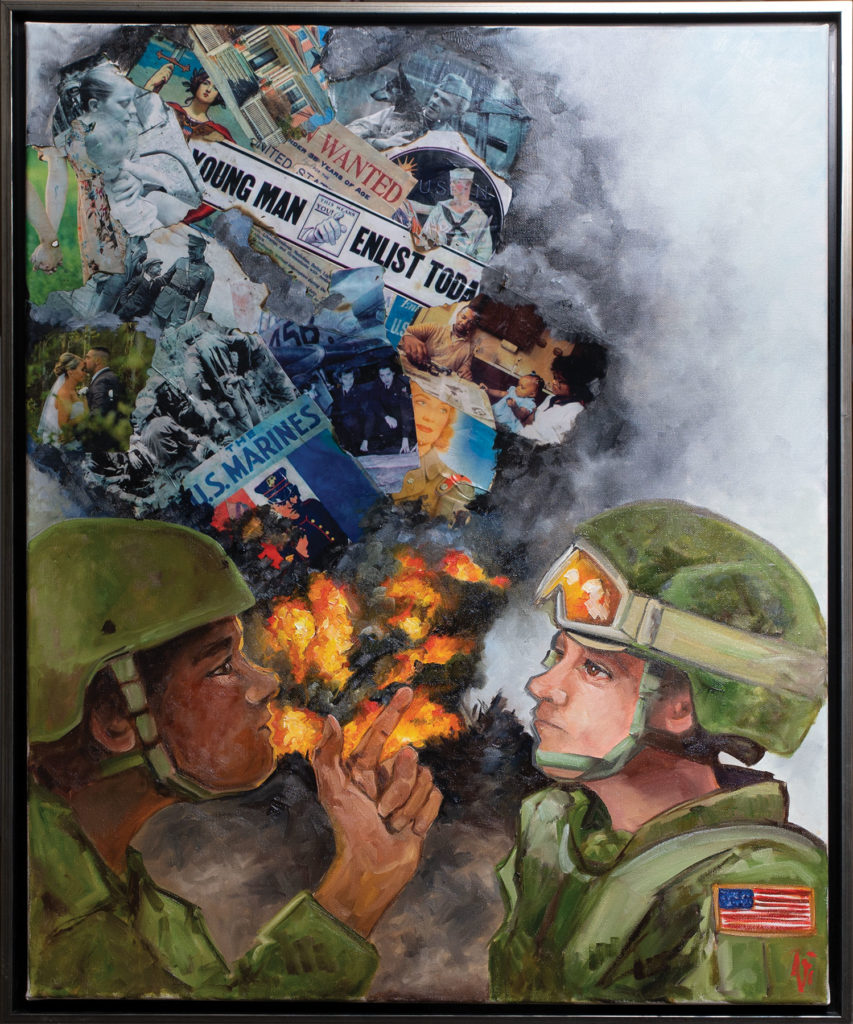 Robert LeHeup and I discussed his organization on a Wednesday morning and by Wednesday afternoon I began formulating my painting. I remember reading Bobbie’s story of Anthony Thornton as soon as it was in my inbox. Her story was one of a tender loving past coupled with heartbreak and frustration and it seared itself into my brain from the start.
I had honestly never heard about burn pits in Iraq or the devastating illnesses that they cause. These were massive piles of uniforms, equipment, computers, and other things the U.S. military incinerated to prevent them from falling into the wrong hands. I was shook just looking at the photographs of black smoke billowing from these pits of waste in the desert. The stories and accusations, the tales of heartbreak, the veterans pounding at the door begging acknowledgement of their suffering.
Thankfully with the signing of the PACT act in August of this year, American veterans, including those who served in Iraq and Afghanistan, will be able to access VA support for a variety of medical problems they likely suffered because of their exposure to burn pits.
However, it came too late for Anthony “Tony” Wade Thornton. I looked up his obituary and found a photograph of a handsome young man with the whole world in front of him. A young man who served just as his father had, as do 80% of recent troops. They heeded the call of duty, honor and bravery.
My work encapsulates the call to duty using recruitment imagery from the past juxtaposed with the fire and sick of the burn pits. I titled it Where’s There’s Smoke There’s Fire. The two soldiers are perhaps saying just that to each other as they watch more than just a pile of trash being burned. The burn pits of Iraq burned up much more than trash. They burned up the reasons for becoming an enlisted person; honor, bravery, duty. They burned up dreams, the promise of a future, of one’s healthy return to the country they had served. They burned up the life of Anthony Thornton.
Anthony Thornton spent the last years of his lives educating people about the dangers of burn pits, imploring the government to listen. It took a long time, but they finally did, thanks to the urging of veterans like Anthony.
This painting is dedicated to your efforts, Anthony.
Thank you for your service.

Anthony “Tony” Wade Thornton joined the Navy in his early 20s, it was his father Quinn who also served in the Navy who gave him the inspiration to create a life for himself where he could travel, find purpose in serving his country, and grow his family. We married a few months after he had begun his career and quickly found ourselves living in Yokosuka, Japan Tony’s first station assignment. We lived there while he completed 2 war efforts serving as a machinist on the USS Kitty Hawk. Our next home was in Gaeta, Italy where the USS La Salle was stationed. It was here that our daughter Carlie Ruth Thornton entered our world, where Tony became a proud Dad, and where his career really began to take off. Tony was a great father, when he was home from duty every ounce of his attention was for Carlie.
After Italy, our next move brought us to Kings Bay, Georgia, where Tony was stationed on Shore Duty. This was a beautiful time in our lives, when we got to spend time as a family and we stepped into our loving roles as Mom and Dad. Tony built treehouses, spent time in the yard and played with Carlie when he got home each day, loving the life that he had worked hard to provide for us. This time was special, however, it did not last. One thing that the Military does not provide is proper support for service men to reintegrate into civilian life, no resources offered for reconnecting and building with spouses, nor space to decompress from the extreme highs and lows they lived in during service. This took a heavy toll on our marriage, Tony was left unable in a space of limbo and his answer to life was finding ways to separate. He achieved this by signing up to be a prison guard at Camp Bucca in Iraq.
It was here at Camp Bucca, that Tony would experience the living conditions that lead to his severe illness and eventual death. The largest prison facility in Iraq administered by the US, at one time detaining 14,000 people, the health conditions were deloparable. The government hired local contractors to handle the sanitation of this facility, individuals who are living in a war torn country of the US creation. The way they disposed of all sanitation matter was by burning. Arce long pits filled with every type of garbage, waste, disposable matter that you could think of at a military prison all got dumped in, then set on fire. These burn pits would stay lit all day long, plumes of dense black smoke would wash over the facility for hours, every person constantly inhaling particulate matter and dioxin agents, poison.
Tony decided to leave the Navy after a year at Camp Bucca, by this time he and I were divorced and he had met a woman, remarried and had his second daughter Lona, it seemed life was moving forward. However since returning home, his health had been off, lingering coughs, strange body sensations that were never properly looked into. It wasn’t until Tony fainted at his job, woke up and had no memory of his own name or that of his wife that doctors began to take his health seriously. A brain scan confirmed that there was a tumor and it was cancer. With no family history of cancer, Tony knew that this was directly linked to his time at Camp Bucca, he knew this cancer was caused by the burn pits, the daily plumes of black smoke and he found that he was not the only one experiencing this. At the time the VA website advised there was no known issue related to burn pits. However, in 1979 the EPA banned burning trash in the US due to 1 single barrel of trash being able to poison entire municipalities, causing cancer due to the toxins released in the air. Tony spent his final years addressing the government directly to take accountability for their actions, fighting for the justice he, his fellow service men and their families deserve.
May 16th, 2015 was the day Tony died. His oldest daughter Carlie 11 years old and his youngest daughter Lona 3 1/2. His passing has left holes in our family, the girls especially, forced to navigate this life without a father, one who loved them so dearly. Still today, our family struggles to cope with his death, with his life being taken from him by the neglect and carelessness of a government that he served. Burn pits are still in operation today, despite the government having full awareness of the health effects and recently added statements on their websites of their direct cause of cancer. There is no effort made to change this practice, no effort to take responsibility for the amount of cancer they cause, no effort to offer preventative care or any extra medical support for veterans.
My song “Whatever Happened,” is an immediate message. The words that need to hit you right in the face, that vibrate down your spine and reverberate in your heart. We need to begin using our voices, speaking about this, as Americans, spread the word and help these Veterans get well. If they are gone, we need to help these family members who have been left behind with their grief and massive holes in their hearts. We need to come together to offer communities spaces where they are free to cry, heal and be supported, to fill in the gaps that our government will not address. Anthony Wade Thornton spent his last years fighting to be heard and spread the word. This song (page 63) is to honor that effort because 15 years since his exposure these fires are still burning.