Inspired by the experiences of Andy Rodgers 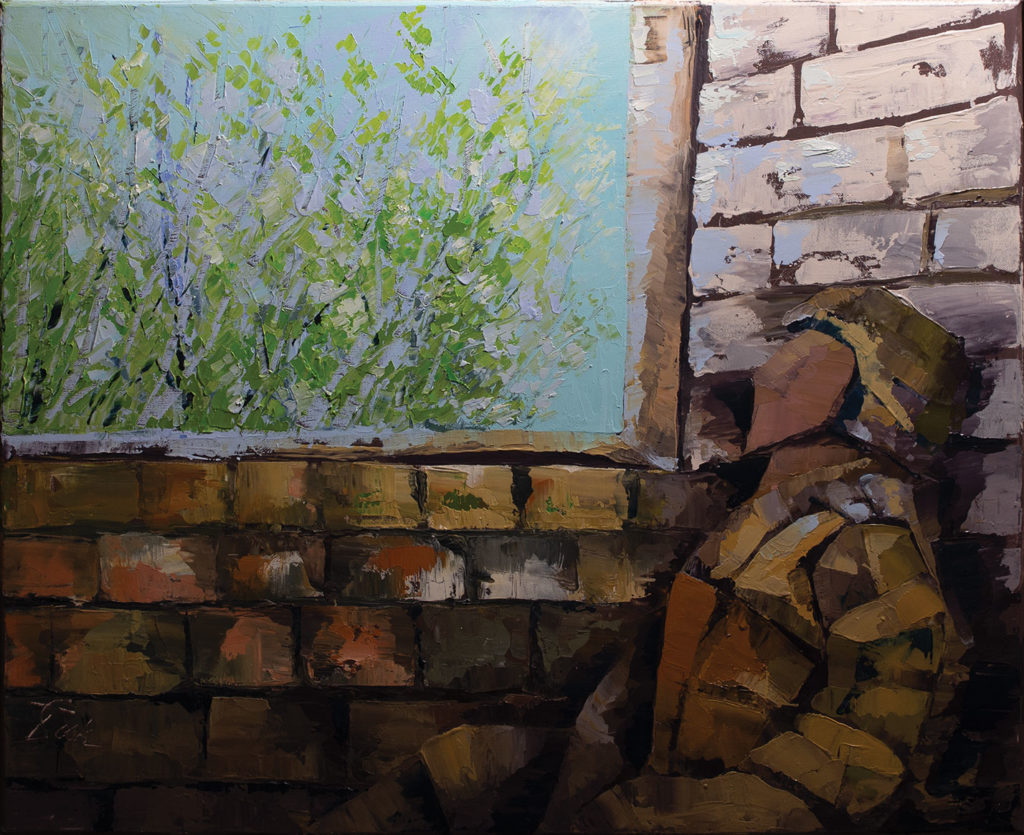 “By the window” is a multi-layered story of an American soldier. The shape of the American flag acts as both the connection and reminder of their separation from civilians, while the lack of specific features on the soldier plays to the idea that they could be of any demographic, just as Andy allows in the bar he owns.
Instagram: @tatiana_sukhanova_art
Facebook: Tatiana Sukhanova

Dear Andy,
I know you still think of yourself as that loser kid back in school. The consummate underachiever is how you put it, struggling to get through school, and then what? Mom and Dad made it crystal clear you would not be hanging around the house pulling minimum wage. So, 1985 rolls around. Eighteenth birthday in the headlights. Now, what? You were kind of obsessed with military stuff after reading Catch-22 in high school, and with a line of military dudes behind you, why not? Seemed like a good way to hit the PAUSE button on education.

You had the dad talk on what to expect, figured you’d be okay, able to compartmentalize what you experienced, what you saw. You’d be fine, man. After all, you watched Rambo. And you were okay, for the most part. Yeah, you saw some pretty bad stuff but mostly after the fact. Kind of surreal, though.
But you were a Ranger, one-upping the old man, right? Eighty-second Airborne, Dad’s finally proud. Really and truly proud. He’s got your future all planned out, now, Sergeant Major of the Army if you play this right! Whoa.
Six and a half years in, and you gotta make a decision. Do you stay or do you go? Things didn’t
progress quite as expected. The promotions didn’t come. The experiences didn’t come. You
didn’t even got shot at, man! Well, that once by a sniper with really bad aim. Does that count?
Six and a half years and you never even had a girlfriend. What did the future look like? You had
another dad talk. Another tour and you would’ve been halfway to retirement, so in or out? Career or not? Pros and cons. The cons won.

Sorry, Dad, I know you wanted more, but I can’t do it. This is not the future I want.

Home to Columbia, 1992.
No friends, no job, no relationships. Maybe you should’ve given this a little more thought?
Attending Midlands Tech, shelving books at the campus bookstore for peanuts, but, hey, it was
flexible hours, no hassle, and you could do it wearing headphones. No socialization required. But
the regrets and questions started, along with the depression.

What was I doing there anyway? Did I even accomplish anything? Should I go back in? What would I do? Where would they send me? Maybe I’m too old. I don’t want to be the old guy trying to hang onto his former glory. Ha, what glory?

You thought about all that every time a new conflict arose somewhere. Somalia, ‘93. Afghanistan ‘96. September 11, 2001, and everything that followed. Should I go?
The thought of going was bad, but the thought of not going was somehow worse. Until you realized they would put you as a trainer somewhere, doing pretend stuff while other guys did real stuff (like get shot at and blown up), or worse, behind a recruiting desk.
You just wanted another chance to check the boxes. But what if you failed again?
One day, a guy walks into a bar… Really?
Yeah, really. You walked into a bar and ended up with a job. Thirty years down the road, and you’re co-owner and general manager of that same bar. And you love it. You know you do.
But you’re still doing it. What? Obsessing. Doubting. Overthinking. You are now the consummate overthinker. Your words dude.
You think you’re a fraud somehow because you own a business without having a business degree. You’re in management without a management degree. You feel like someone else took the test, and you got the A+. How did this even happen?
It happened because you took and passed the course called LIFE CONDENSED. Aka, the
military. You gained confidence and you matured. You served with honor and passed the baton as you should. Your words again.

But what if?
What if you’d been the smart kid in school? Graduated with honors, gone off to college, and earned yourself a fancy degree, and a bunch of letters after your name? What would that look like? Where would you be? Not in your hometown living a great life and doing what you love.
What if that Humvee you were in hadn’t been loaded with sandbags in the floor? You would quite likely be missing a limb or two. What if that sniper had been a sure shot? You might be dead.
What if you’d gone back in? Would you have survived? Would you have been seriously wounded? Maybe carrying deep emotional trauma? What if you’d come home in a coffin? Would your dad have been more proud?

So, what if you finally cut yourself some slack and accept credit where it’s due? What if you start believing that you were born at the exact perfect moment in time to do what you did and to become who you are right now? What if the Andy you are now is actually enough?

You are a leader. You care about people. You like helping people. You look forward to getting up and going to work every day. You have a past that everyone doesn’t have. It’s yours. Own it.
Remember the good parts, even if you do it through rose-colored glasses. That’s okay.
So, what if you can’t relate to today’s soldier? Today’s soldier can’t relate to you, either.
Different times. Different paths. It’s what makes the world go around. And like your dad said,

“You are not the hand of retribution. Sometimes, you get to stand back and do nothing.”

You didn’t do “nothing?” You led. You served. You survived. You have an amazing life that many would envy. Your wife says that your love language is “acts of kindness.” If that isn’t worth more than any medal, I don’t know what is.