Inspired by the experiences of Mary Ann Lane 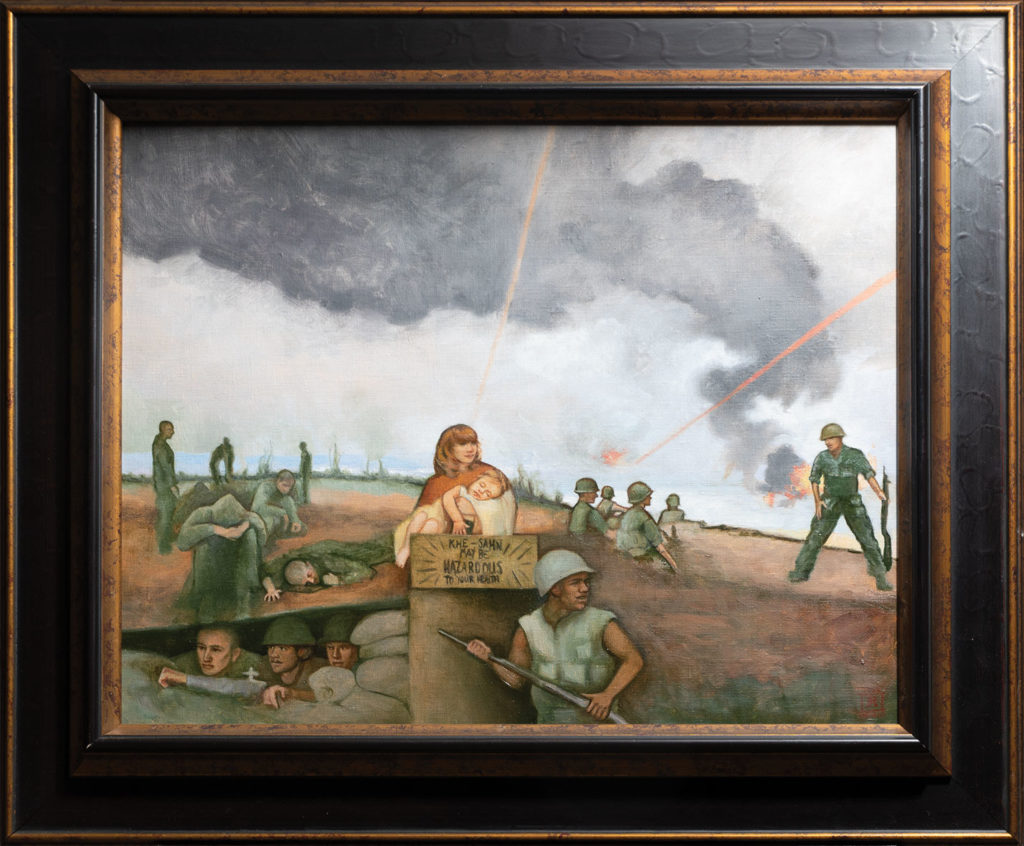 "Eulogy of the Besieged"

Art is earthy; it stains your hands, and seeps through and stains your soul, crossing the membrane between what is material and what is not. Art is raw, a cutting edge in an ancient way. There are many personal realities present in “Eulogy of the Besieged.” Vibrations from Khe Sanh transfer particular meaning: weaving tight the bond of 2 people and their child, and just like them many more. We find our own echoing generational stories here. “Eulogy of the Besieged” presents the nexus of shared family trauma multiplied by the intractable position so many faced during the 77 day siege of 1968, and beyond. And even yet, as new family nexuses are formed, there the new seed of life springs in the heart of the child. Here we hover just beyond the veil, inexplicably, vibrantly, ALIVE.
Facebook: rebecca.king.hawkinson.fine.art
Instagram: @rebeccakinghawkinson

My husband called to say that he was safe-
That he had wired our living room ahead
With traps in case they came to fight.
Over a sofa?
Over the sofa they had just moved,
(Without a scratch, you know?)
That was just one day of the siege we fought
From one cold house to the next.

She was pumping gas too
And her blank look my way was likely just the heat.
I mean, what are the chances?
Two strangers on the same morning,
Both inside reeling
At the sudden certainty there’s not
A single place to go?

You never know. She looked
Like I felt I looked, that’s all-
So normal outwardly,
Inside quite sure I stood alone,
Alone in my impassable life,
Alone with my toddler headed back
To your average Florida home
Armed with your average booby trap.

She got her gas and went her way
And somehow so did I.
That’s nature for you-
The miracle that sometimes we
Can even take another step,
Make one more turn.
Just like the guy he killed with his grenade,
We burn until there’s nothing left to burn.

Sure, he told me all his stories.
Us both treating vets all day,
Our dads both being military.
I’m tough enough, I guess he thought-
Enough to live his history.

You dug all day at Khe Sahn,
He said, you dug all day,
Filled sandbags for ever,
Bunker after bunker,
Carved them deep as you could
Away and down from the burning air,
Away and down from the heat and the sound.
Sometimes I stood my ground, I said-
The sofa is just fine and why,
Why would the movers start a fight?
So many times, I was accused of ‘putting gas on the fire’-
That’s how it felt to Chris,
And it took me years to learn
To walk away, retreat a little, give him time.

Not that he was always wrong-
He made you think. Like if you pay cash for gas
You wonder at their little game:
How the pump slows down
And down at the end,
As though you might give up
And they’d get those last few pennies back.
Sometimes he was right about people, for sure.
I learned that from him-
Sometimes this life is a war.

This life can be one long, slow fight.
For Chris it dragged at the end,
One illness after the next,
Fought in the homes he kept so cold
In the hope that he might sleep,
In the homes we changed so many times
In case ‘they’ came for him.

At Khe Sahn, that first morning,
The ammo dump was hit
And burned for two days straight.
For the boys that died then
Their suffering was quick- all their pain was done
Right there, day one.

Not for my mom-
When she died in a fire
It took her seven days to go.
A full week in the ICU,
Like the numbers slowing on the pump,
Like those guys you meet
Who died back in the war
And just don’t know.

I think about my husband’s life.
His dad had been at Omaha-
That says enough, I guess.
The only childhood Chris ever saw
Was with our son, all he learned
From his dad was to do one better,
Join the Corps. And his mom-
Her moods?
He learned to tiptoe there.
Poor kid. He was a vet
before he ever went to war.

And after Vietnam? All he got from his dad
Was suck it up, and so the care
He didn’t get at home, he took
Elsewhere, the help he never got
He gave to strangers- that’s walking point
While hiding you’ve been hit.

In thanks for his service to our nation
My Chris received;
A heart attack, a stroke, cancer-
He won all three.
Or are we meant to say instead
He found a role, a wife, a child,
And call that victory?

My fantasy when I was young
Was to figure out how I could help,
To be a nurse, and you could say
By marrying Chris, I got my wish.
It feels a gift to heal, to be there to care,
But all the good such good achieves,
Sometimes it seems to me,
Must first require the same amount
Of pain and injury.

After our soldiers quit Khe Sahn,
The men went back, still under fire,
And worked to make it flat again.
They sank each hole, each last sandbag,
Until their work was done.
Then we were told the siege was past,
The endless battle won.