Inspired by the experiences of Bahroz “Blade” Mohmand 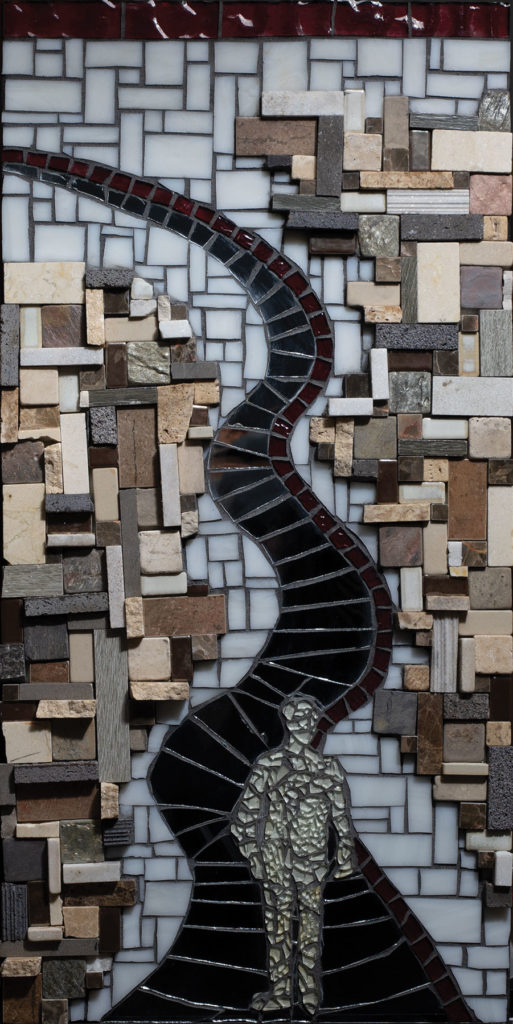 The goal with this piece was to listen to the story that was being told, and create something that many veterans could see and relate to their own experiences. The main character of the story is the man made of cracked glass in the center. No one can experience the things those in the armed services do without it leaving marks, scars, or cracks. He has reached a peaceful place on the path he has walked, looking forward to what is ahead, not focusing on the difficulty that is behind. The path is made of mirrors, showing that the way is not restricted to one possibility, each person will look at their own path, and see a unique reflection of their own challenges. The side is lined with red, the blood and the hardships along the way. Surrounding the path are the mountains of the main character’s homeland, the familiar yet harsh backdrop to the story. The white background around everything else is my own message of hope for inner peace that I would like to convey with this work. Despite all the pain and obstacles that are faced, I hope more and more veterans will find a way to make their own journey and have that peace in their heart, and maybe even heal some of their scars as they find a path worth taking.
Facbook: FivePeaksStudio
Instagram: @olgayukhnostudio

The Day of the Mission

In September of 2021, Bahroz Mohmand, callsign “Blade”, moved away from California with his wife and their three children to live in Charlotte, NC, where Booyah and his family also reside. To this day and for many days to come, they continue to direct their efforts at expanding the positive influence of Interpreting Freedom Foundation, and have already changed many lives through the aid and guidance which they are able to provide.