Inspired by the experiences of Tony Fiteni 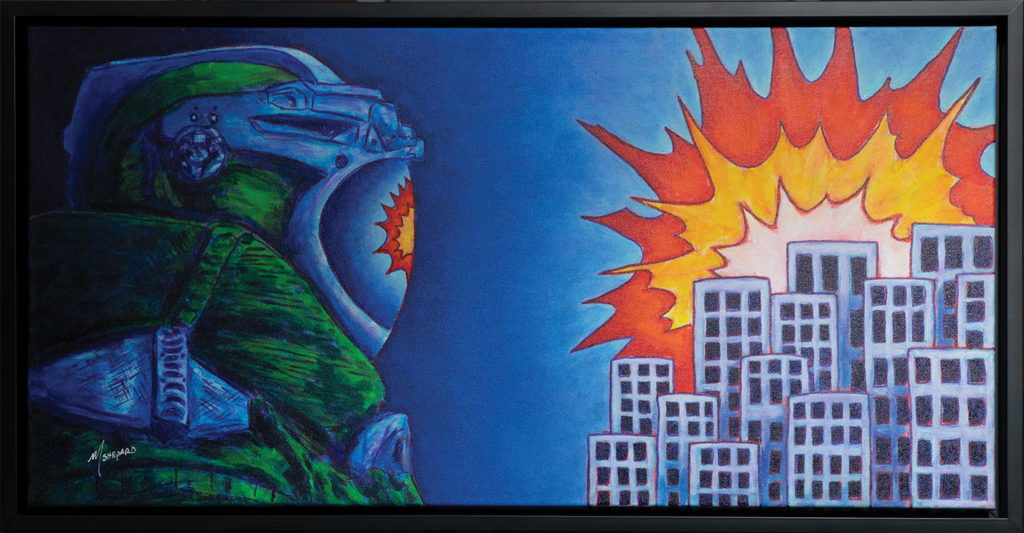 When approached to paint a piece for Tony Fiteni’s story, I asked myself, “How? How can I relate and connect a piece to this story?” “I’m not military and I don’t like war, guns, loud noises, conflict, or destruction.” So, I turned to the emotional and mental aspects of military work and the havoc that could be wrought on an individual’s life: stress, trauma, fear, emotional fatigue, confusion, and anxiety to mention a few. This took me to a period of my life during 2019 when I was recovering from a severe alcohol addiction and was fighting to stay alive. I feel this time of my life could only be best described for me as living in a war zone. It is from what I experienced during period I drew the inspiration for the painting and was able to connect personally to the story.
During 2019, I was suffering with a lot of physical and mental issues relating to recovery and liver complications. I didn’t have my medication’s and was walking around aimlessly confused, stressed, exhausted, hungry and scared. My mental capacity was almost completely diminished. There were times I didn’t know if I was awake or not. It was like I was watching myself through a tunnel going through these horrible events. At times, it seemed as though nothing was quite right or even real. The whole time I felt like I was in this cartoon-esque nightmare. This is how I decided on the style for this piece to relate to Tony Fiteni’s story about being an EOD expert.
There are two halves to this painting and based on artistic elements, I tried to balance the piece to keep your eye moving back-and-forth, never leaving the canvas, in order to tell the story. The left half of the painting represents Tony dressed in his EOD gear and facing towards his daunting task of dealing with the post bombing destruction and potential life-threatening aspects of his duties. This style is somewhat illustrative, but I purposefully didn’t make the outlining perfect in order to convey this dreamlike version of reality that doesn’t seem quite right.
The background is painting from dark to light to move you from left to right and convey a tunnel like scene if you can imagine looking at an explosion head on with darkness all around. The explosion is painted to bring you back across the canvas. The lights and darks and contrasting colors were painted to create rapid movement to bounce your eyes back-and-forth throughout the painting which should subconsciously convey a sense of urgency and tension. The size of the city and explosion are painted to be symmetric with Tony’s jacket and helmet respectively to give balance to the piece.
If I succeeded, the viewer should be able to easily connect with this piece through the fun nature of the style, vivid colors, and high level of movement within The painting and appreciate the story of Tony Fiteni.
Thank you for your service.