Inspired by the experiences of Christopher Pace 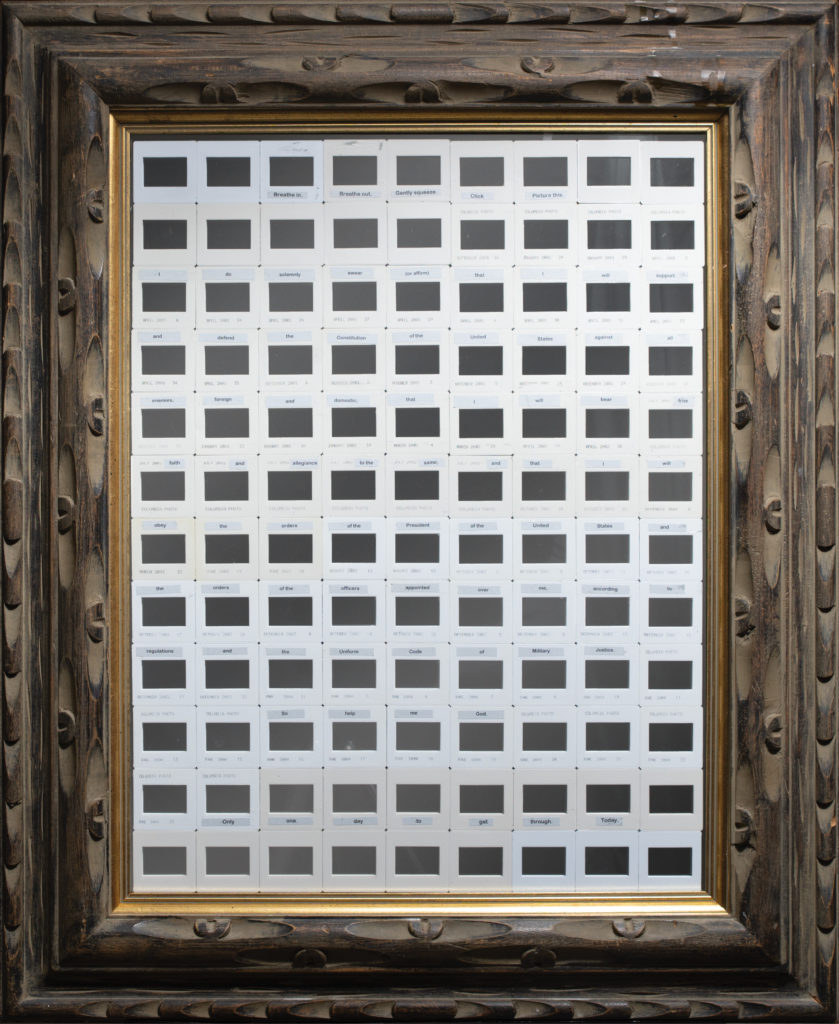 I’m not a minimalist. For me, “More is more!” and almost always will be. I read the essay Picture This and immediately started gathering all sorts of things in order to respond to these poignant words. Yet a little voice from the back of my terribly busy mind persisted in saying, “Susan, this is a work about identity and feelings of isolation. Wouldn’t “Less is more” be a better approach?” I slowed down. I read the essay again.
June 2000 to – June 2004 was a time in Christopher Pace’s life when he might have looked into a mirror and known exactly who he was and where he belonged. This corresponds to a time in my life when I didn’t have a clue. I was at the start of my artistic life, taking slides of some awfully amateurish works and looking for a creative community.
In a straight-forward, minimalist way, slide mounts were arranged as if a timeline corresponding to Pace’s enlistment and include the military enlistment oath. The work poses questions of identity, community, allegiance, and isolation for those seeing their own reflection.
Facebook: susan.lenz
Instagram: @susanlenz

Stolen moments in time. When I developed my first photograph, I was “souled.” Photography, my art, has become the means through which I communicate with my Higher Power; my Higher Self.
Looking through a lens makes the world easier to understand. Easier to hold, digest. In this sacred place, I control the exposure and light, depth of field, and focus.

Click
It doesn’t look like much. Captured in solemn black and white, a room of shades and shadows. A Mother raises children here; a daughter(s) and a son. He sees the world from an isolated corner. M.I.A. father and
a solitary Y in a chromosome sea of X.

Click
Alone in the dark corner. Not my room. A room where walls formed as I focused on the sky. Now, even the sky is gone.
Kids running around; me and my sister among them. Eyes closed; I see her with me.

Click
A last solemn act as a civilian.
I, Christopher Pace, do solemnly swear (or affirm) that I will support and defend the Constitution of the United States against all enemies, foreign and domestic; that I will bear true faith and allegiance to the same; and that I will obey the orders of the President of the United States and the orders of the officers appointed over me, according to regulations and the Uniform Code of Military Justice. (So help me God.)”
And so, it began. June 2000-June 2004 U.S.M.C.

Click
Subject: Christopher Pace, veteran United States Marine Corp Infantryman.
A melding of kinship among men of the same persuasion. We reminded each other; we had the same sand in our boots. That sand will forever be there.

Click
Home. Not home where I lived and grew up, but a place where I belong, or at least a place to fit in. I wasn’t alone anymore, at least for now, dancing with the bees.

Click
“And here I am. You know, kinda like the music video, what by Blind Melon. (No Rain,) I’m here and here are all the honeybees dancing around, I found the gates of open air. I didn’t feel isolated.” Christopher Pace, USMC Veteran
Bird of a feather flock together, sometimes it is said.
Birds of a feather join the Marine Corp Infantry. There’s a way to view things. Not that there’s anything wrong with anybody here, it just takes a certain mentality to enlist in the Marine Corp Infantry. Bad ass, thrill seeker, on the sharp and present edge between safety and danger.

Click
And here the bees dance
Hear the bees’ dance
I’m okay, you’re okay, but none of us really are. I am who I am, but I didn’t used to be.
In the Marines, I trusted, and had the trust of brothers.

Click
Nights in these mind fields, friends die and die again. They’re gone, yet in my dreams they visit.
Eyes closed; I see me with them.
Ghosts
A man’s heart is stonier. He sows what he can and tends it. – Stephen King, Pet Sematary

Click
Persistent endeavors to fit in at college, even pledge to a fraternity failed miserably. Painfully.
I pledge my loyalty to the fraternity and to my fellow brothers blah, blah, [Ask Robert about getting the fraternity pledge.}
Blindfolded pain, anger, and shock

Click
Blinded and folded, candle’s broken darkness.
“Pledge, step forward. Recite the oath. Again. Louder. Recite the oath. I can’t hear you. Recite the oath.”
“Against the wall, Pledge. Kneel.”
Having served as a Marine Corp Infantryman in Afghanistan, experienced combat, and trauma, there is no room to tolerate fools.
“Don’t put your hands on me. I will fight back,” warned the Pledge. They did. I did.
“It wasn’t us. We didn’t see who did it,” they said
I did. Try telling that to no one who will listen.
“Leave now!” they said
I don’t guess they take too kindly to folks like me around these parts.

Click
Walking on. One foot
Before the other. Again!
Again, then another.

Living on. One day
Before the other. Again!
Again, then another.

Click
Isolation’s exorcism
I’ve felt isolated, lonely, and alone all my life, except when I was in the Corp. There is no comfort in isolation, only familiarity. It’s right here. I know how it feels. I know what to expect from it, and it has been true.

Click
Isolation’s demons don’t like baseball, or the Fourth of July. A day of staying ahead of them happened at Durham Bulls Athletic Park last year. It was a happy day.

Click
Do you see it? It’s beautiful. Everybody has seen it, TV, Magazines, maybe even one the radio. That little white house, the one with the picket fence. Wife and kids and four car garage that is now a mother-in-law apartment until she dies, then we can rent it as an Airbnb. A cul-de-sac, and the eight-foot fence between our neighbors. There will be an HMO and a fight over flying the flag …

Click
Night and day inside out. Fake sunshine floods the streets, from lamps and bulbs and neon tubes. Cityscapes’ glows exposed, processed, and refined.

Christopher Pace: Virginia Highway Patrolman, Combat Veteran, Photographer, Baseball Fan
It’s Tuesday, maybe. It’s raining. Haze and fog make a monochrome world; shades of grey, black to an off white that will never bleach clean. Only one day to get through. Today.