Inspired by the experiences of Zia Ghafoori 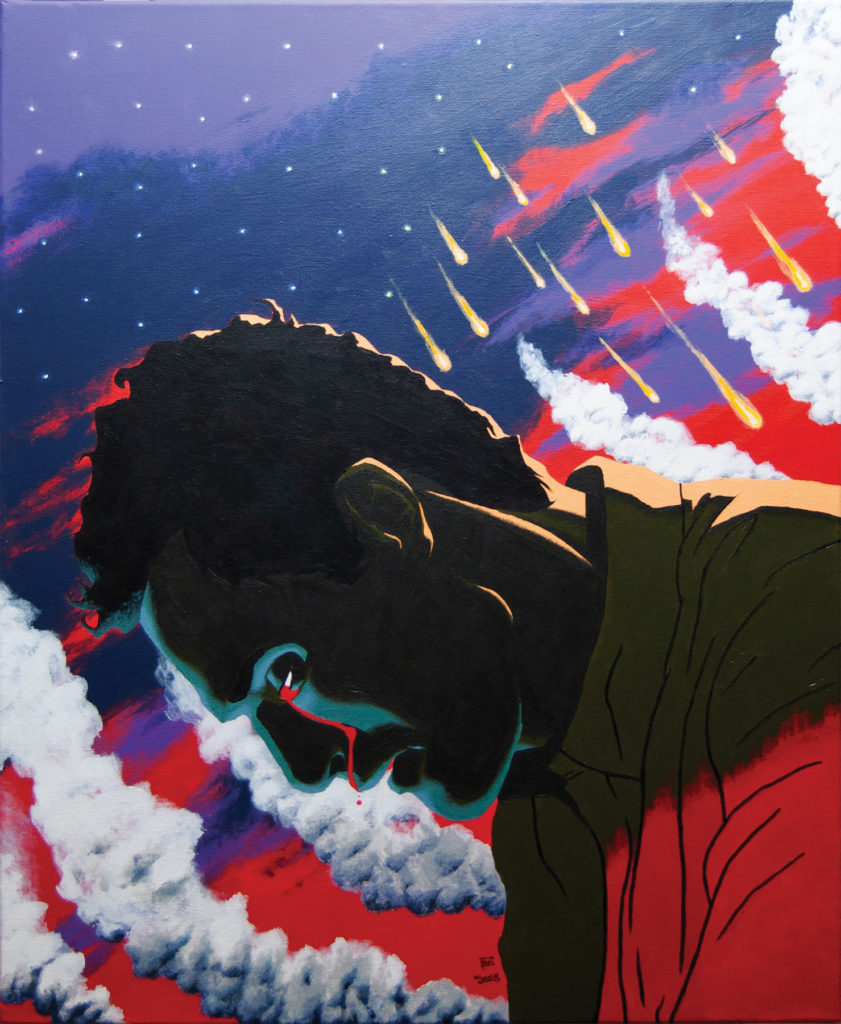 This is the third painting I’ve done for Bullets & Bandaids within the last 10 years. It has always been a product of love and responsibility for me. Responsibility to the veteran’s life source, their sacrifices, their blood, their capacity to still breathe and tell their story. Love for my craft, love for my fellow humans, love for the type of sacrifices that only some make and experience, love for what Bullets & Bandaids stands for.
Each painting has been an excellent challenge for me, each in their own individual way. The idea of trying to capture someone else’s crucial and sometimes most traumatic life experiences is a massively daunting task for me. Especially without actually knowing the individual. However, that’s what makes this challenge so special for me and so worthy of undertaking. It’s always been humbling and quite reflective for me.
With Zia’s painting, the challenge was trying to convey the many different layers that I interpreted from his story and Ed’s words. Usually there is one thing that you can grab and focus on, but with his story I felt like there were several main threads that were equally important to portraying what this man had been through. It was very difficult to focus on just one, I felt as if by choosing only one I would be betraying the other factors that made his experience and story so poignant within what he experienced.

Instead, I chose to attempt at addressing all of it within my painting. It took a while, lots of thinking and research. Eventually the threads spoke to me towards an idea, a bit of an abstract and surreal idea. The threads spoke to me about sacrifice. They spoke to me about commitment and dedication to ideals and standards above the self. They spoke to me about disillusionment and disappointment as well as hope, resolve and regeneration. Hopefully I was able to convey those voices into this painting and you too can feel what I felt.
I don’t like to do play by play descriptions of my works, I’d rather you the viewer, come up with your own opinions, inspirations and commentary. That said, since this is a collaboration and telling of a part of someone’s crucial life journey, I’ll mention a couple of important details from my attempts at honoring Zia’s journey. You may spot an American flag in the background, proud and looming, while also flaming out of the sky with no regard for ideals and sacrifices. The purple you see in the painting is meant to honor him with a slice of one of the many things that should have been recompensed to this man for his commitment and sacrifice. Some of the other details may be a little more obscure, some a little more literal. I’ll let you figure them out for yourself.
Thank you Zia, for allowing me to share some of your story.
Instagram: @infidel_castro_x

SOURCES
Along with the Bullets and Bandaids interview conducted with Zia Ghafoori on April 27, 2002, this account draws on these sources;

Medal of Honor Ceremony: President Trump presented the Medal of Honor to Army Master Sergeant Matthew Williams for his bravery and actions during battle in 2008 in Afghanistan, C-SPAN, October 30, 2019, https://www.c-span.org/video/?465889-1/medal-honor-ceremony.

Weiss, Mitch and Kevin Maurer. No Way Out: A Story of Valor in the Mountains of Afghanistan. New York: Berkley Caliber, 2012.